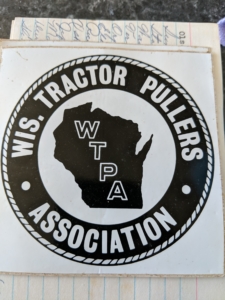 Where It All Began!

The Wisconsin Tractor Pullers Association (WTPA) will be celebrating their 50th year as a pulling organization in 2020.  The organization that it is today was built on the ideas and visions of many early pullers.  They were looking for a consistent set of rules to follow as well as improved safety at pulling events.  Who were these people and what happened in the beginning and throughout the years?

A series of articles will be published monthly on the WTPA website to take a look at how the WTPA evolved.  Stories from those early times will be shared to help you get an idea of what pulling was like in the beginning and how it has changed over the years.  Most of the factual information will come from the WTPA archives.  Pictures and stories will be shared as we go along.

This project is a group effort spearheaded by Michelle and Chris Pichler.  We will be reaching out to people who were involved in the early years to hear their stories.  The plan is to follow the evolution of the group through the years so modern pullers may be tapped for information.  If there is a topic you would like to know more about, please let us know and we may include it in an upcoming write-up.  If you, or someone you know, have any stories or pictures to share, please contact Joyce Hoffman at jhoffman49@centurytel.net or send it to wtpapull@gmail.com.  We will try to include as much information as possible.

Before 1970, tractor pulls were held at local celebrations and fairs.  It was a place for neighbors to get together and compete with their farm tractors.  Rules were set by the local group putting on the pull which meant each location had a different set of rules.  Safety was a concern and a group of pullers and promoters felt there was a need for consistent rules and improved safety for tractor pulling events.  From those early roots, the Wisconsin Tractor Pullers Association (WTPA) was formed.

The first organizational meeting of the Wisconsin Tractor Pullers Association was held on April 6, 1970.  Minutes from this first meeting listed the group name as the Southern Wisconsin Tractor Pullers Association.  This is the only reference to the word “Southern” used in the WTPA name.  The meeting was held at the VFW Hall in Stoughton, Wisconsin.  Minutes from this meeting showed that an election of officers was held with Henry Fredenberg from Cottage Grove elected as the Chairman/President, and Lyle Uphoff from Cottage Grove elected as Secretary-Treasurer.  The remaining Board of Directors were Lloyd Luedtke from Allenton, Robert Nelson from Deerfield, Jim Skaar from Cottage Grove, Edgar Alme from Stoughton, and Dan Brauer from Brodhead.  The General Chairman was Sheldon Schieldt from Madison. WTPA dues were set at $5 per person and Rules were defined. The minutes show that discussion was held on joining the National Tractor Pullers Association (NTPA). NTPA dues were listed at $8 per person.

Pulling contracts were drawn up listing the group as the Wisconsin Tractor Pullers Association using the World Dairy Expo office in Madison as headquarters.  This relationship between the WTPA and the World Dairy Expo, unfortunately, only lasted one year.  WTPA headquarters moved to the James and Nola Skaar farm where Nola became the secretary/treasurer for the organization.

The first WTPA state championship pull was held at the Dane County Indoor Arena and the speed of the contestant was determined by a pace tractor. Operators were required to remain seated during the pull and have at least one hand on the steering wheel. Only one pull was allowed for each contestant unless a tie was declared. The pull was considered over when forward motion of the load stopped.

Prizes in each of five classes were:

**Trophies were given out for the top 10 in each class**

The cost of putting on a WTPA pull for promoters was $255 (and later $400 for Juneau and Platteville) plus 50 cents per mile one way from Cottage Grove for the equipment truck, and $2.00 per tractor to be paid to the promoter immediately after the contest. Additional details that were handwritten on the bottom of some of the contracts read:

“$50.00 guaranteed in case of rain if notified by 12:00 am the day of the pull.  The promoter agrees not to put a pull on in County prior to date of pull.  Sponsor agrees to furnish pace tractor and man to drive it.”

A membership meeting was held on August 11, 1970 from 8:30 pm to midnight at the Cottage Grove Town Hall.  A sign-in sheet had listed 47 paid members. 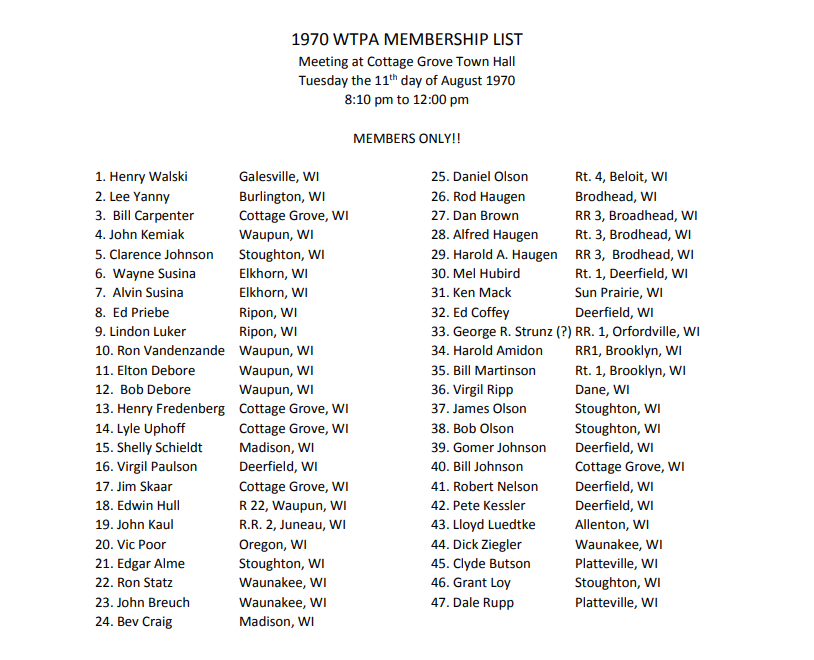 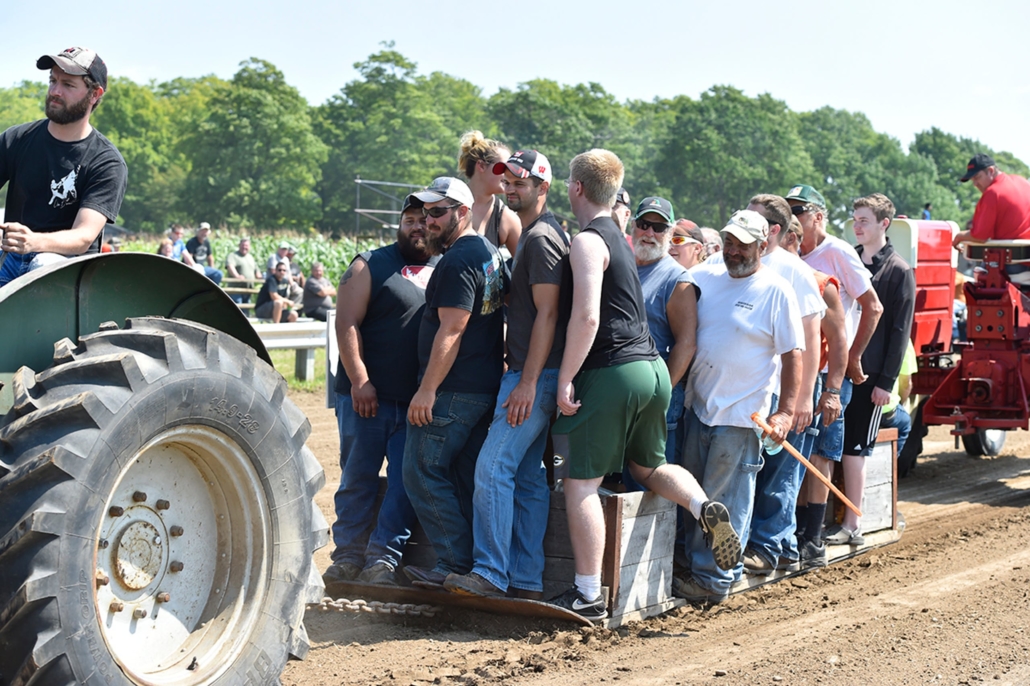 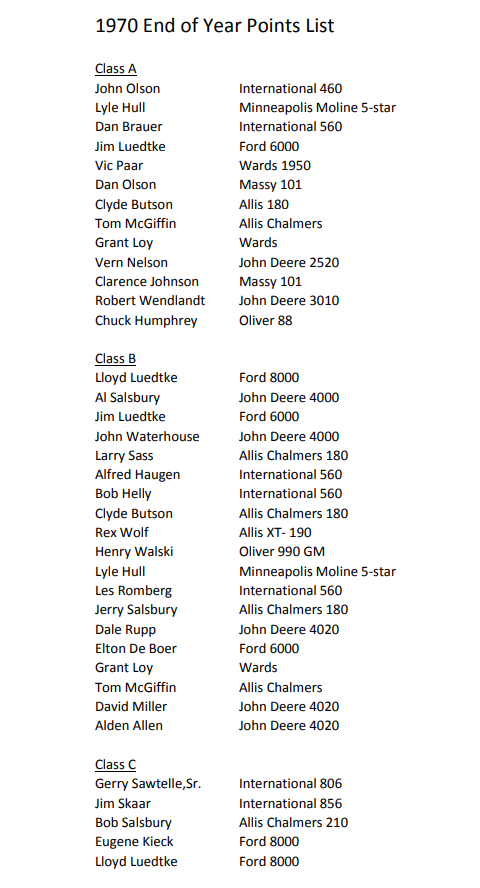 (This story is told in first person from Henry)

I am the longest continuous member of the WTPA and the fifth person from Wisconsin to join the NTPA.  These are some of my recollections.

The first quasi WTPA pull my brother Richard (Dick) and I pulled at was Stoughton, Wisconsin, in 1969.  Two other pullers with tractors from our area came with us. This was the first time we pulled an automatic sled on dirt. We first met Lloyd Luedtke and Ken Mack here. Lloyd would always walk up and down the track with his sled.

My brother and I were standing track side when Ken was unhooking tractors from the sled and got injured. What happened was he unhooked a two-cylinder John Deere which had almost stopped running. Sometimes these two-cylinder John Deere would start running backwards when that happened.  The driver started to drive ahead, the tractor backed up, and Ken got pinned between the tractor and sled. Later in July Henry Fredenburg and Lloyd reciprocated by coming to a pull in Dodge, Wisconsin. Henry brought his 6V71 Detroit John Deere. Lloyd came with his Ford 6000 and won his class.  This was the same time frame that Neil Armstrong and Buzz Aldrin walked on the moon. At the time I thought, what could be better, a tractor pull in Dodge and astronauts on the moon?

We pulled locally and in Minnesota summer 1970. Minnesota had become a member state of the NTPA. In the late summer 1970 we were invited to come to a pullers meeting in Cottage Grove, Wisconsin. There was a lot of discussion about the direction of the organization. The final decision was to join the NTPA for the 1971 season. There were a few pullers who were disappointed in the new rules. One rule which was not permitted was the replacement of inline-6 farm tractor motor with any inline-6 that would fit such as a Ford truck motor.