Growing Pains and the Birth of Major Pulls!

By 1973, the rules for pulling were evolving as tractors became more specialized. The super stock tractor were no longer just an out-of-the-field tractor, the Modified classes were developing into a look of their own, and the first national shows were being developed in Wisconsin. The Wisconsin Tractor Pullers Association (WTPA) classes continued to run under the National Tractor Pullers Association (NTPA) rules with some exceptions. The March 20, 1973 minutes had a rule that stock classes must follow the manufacuture’s cubic inch limit, as well as the stock bore and stroke. During this meeting the board also voted on the addition the 5,000# Modified class and some rule changes for the Farmer classes. 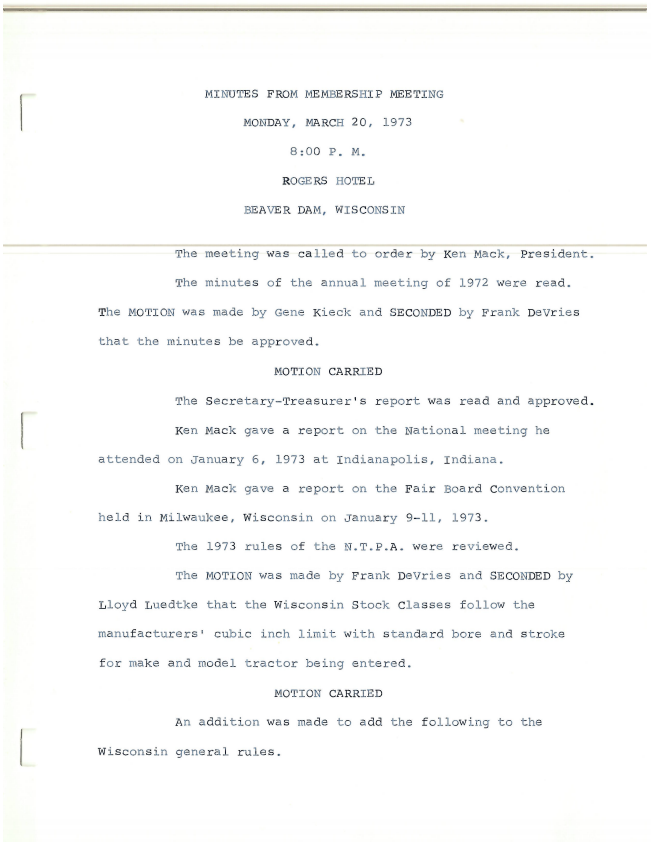 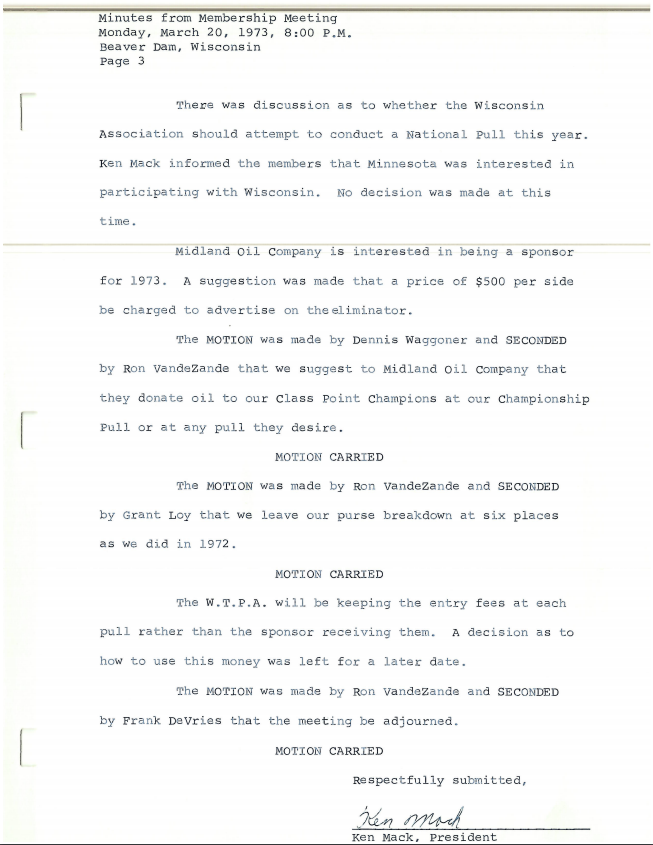 A major topic that was mentioned in every Board of Director meeting was the State Championship pull. The board worked together to make this pull the highlight of the season. They agreed that they would want this to be the season’s last pull. In 1973, the first ever state championship pull took place on October 6th and 7th at the Dane County Coliseum, which is now known as the Alliant Energy Center in Madison, WI.  The area was a dirt track with a grass field up to the track where people could sit.  At that time the State Championship pull was held at the same time as the World Dairy Expo. The August 15th, 1973 minutes showed discussions and details for classes, purse payouts, and other logistics of this pull. 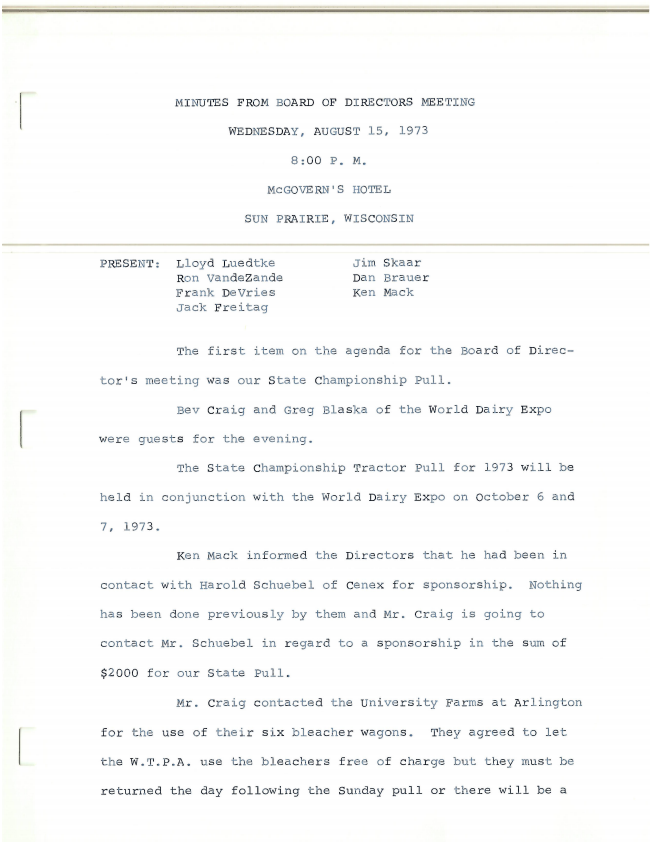 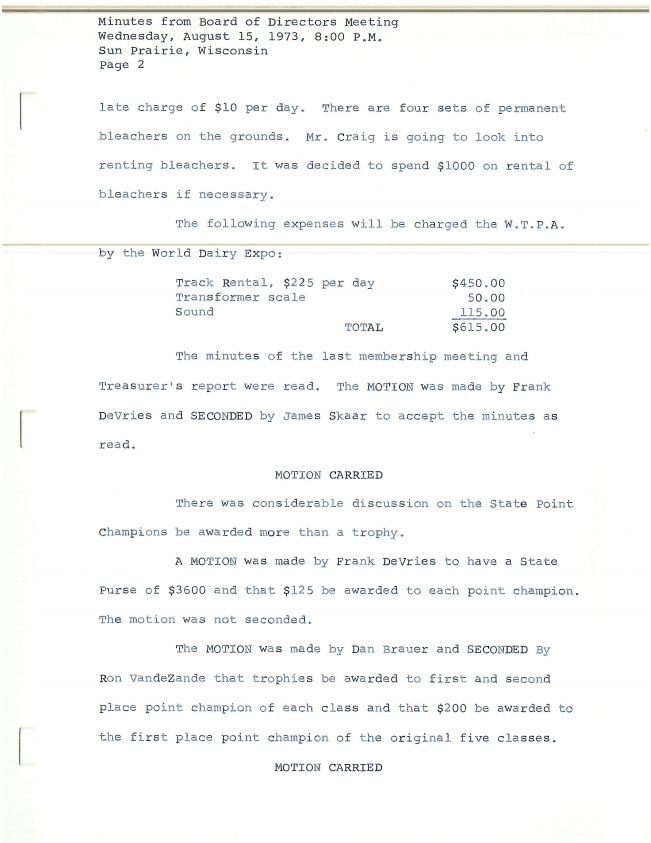 1973 was the second year that awards were made for Most Improved Puller, Puller of the Year, and Promotor of the Year. The Board of Directors came up with a list of 3-4 names for each award and voted by anonymous ballots for each award. The winners’ names were placed in an envelope that was opened and revealed at the State Championship pull where trophies were given out for the class winners and recipients of the awards pullers voted on.

In the December 9th, 1973 annual membership meeting minutes, the topic of the “energy crisis” was brought up.  A little history courtesy of Wikipedia states: “The 1973 oil crisis began in October 1973 when the members of the Organization of Arab Petroleum Exporting Countries proclaimed an oil embargo. … By the end of the embargo in March 1974, the price of oil had risen nearly 400%, from US $3 per barrel to nearly $12 globally; US prices were significantly higher.”

The board had concerns how this energy crisis would effect the 1974 season. According to Henry Walski, the crisis was over by the start of the pulling season and did not have much of an effect on pulling. Henry had an interesting story about his personal experience with the energy crisis while attending a pulling event. “In late summer 1973 we heard about the ‘Indy Super Pull’ organized for February, 1974. My brother-in-law, Toni and I went as spectators that year along with Toni’s brother who was located in Chicago. Toni collected a couple of five gallon cans of gas for us and on the way we went to pick them up and head to Indianapolis. There were only a few stations open on the trip. There were no major problems during the summer of 1974 that I can remember. Earlier that year, there were some closed gas stations, long lines, and gallon limits. There were no purse payout increases to help cover travel expenses that I can remember.”

Membership continued to grow as interest in the sport of pulling grew. In the early years, most pullers were farmers. As classes evolved, specialized mechanical skills were needed. More pullers were from off the farm, some were veterans who had training in jet engines, while others were just good mechanics with day jobs. It was a time when pulling families were traveling to attend pulls and some pulls were several hours drive from home so campers and tents were becoming common on the pulling circuit. It was a time when communication was still a challenge with no answering machines or cell phones. Writing letters was still a common way to obtain information. The following letter was sent to the WTPA by an 18 year old high school senior, Ron Hoffman, looking to get into pulling.

Letter from Ron Hoffman to NTPA and Their Reply 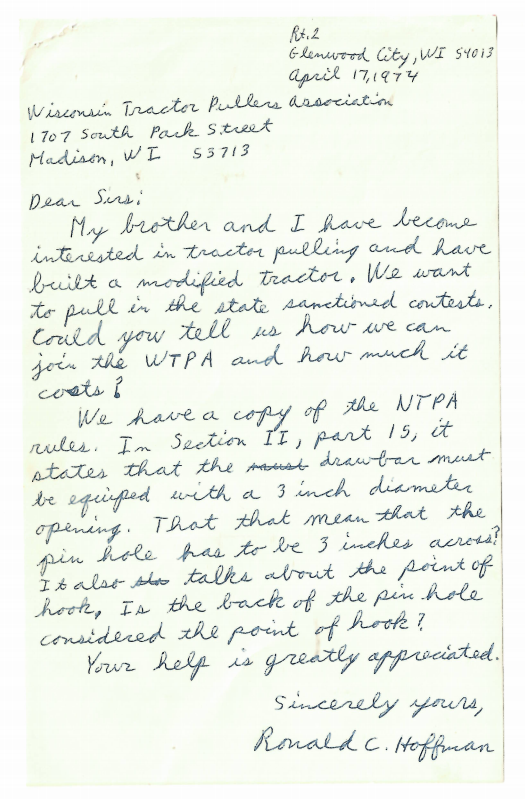 The membership continued to grow despite the 1973-74 energy crisis in which it didn’t stop many people from getting into pulling. 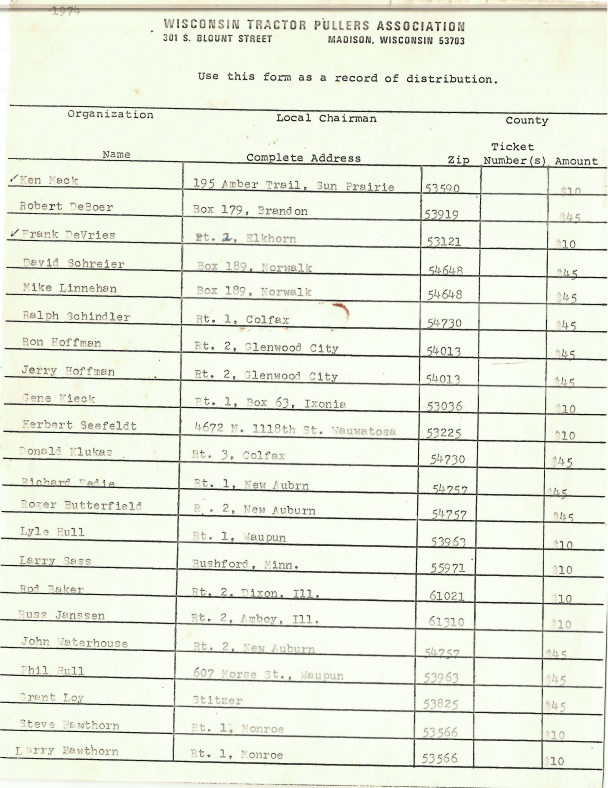 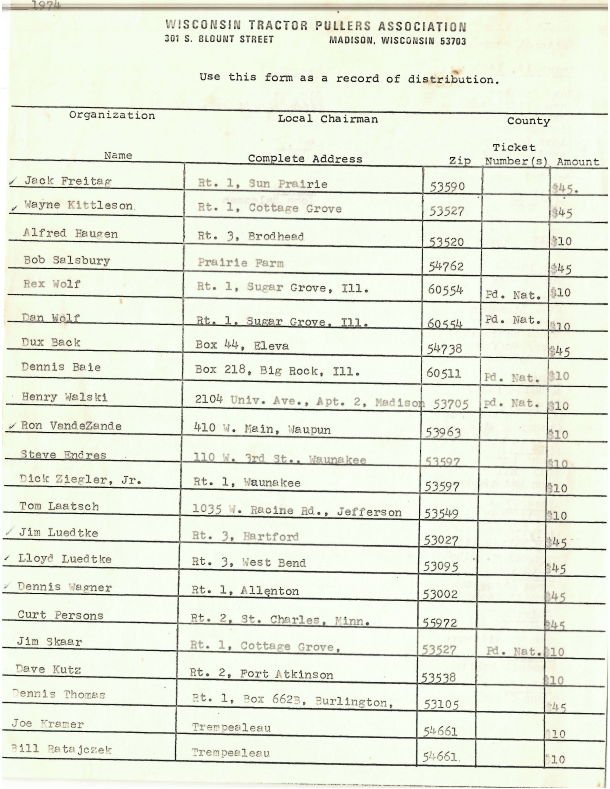 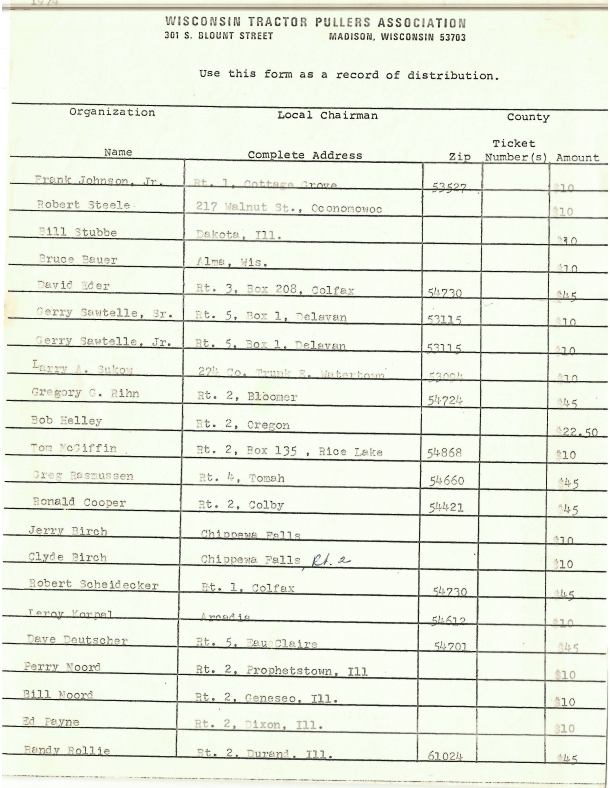 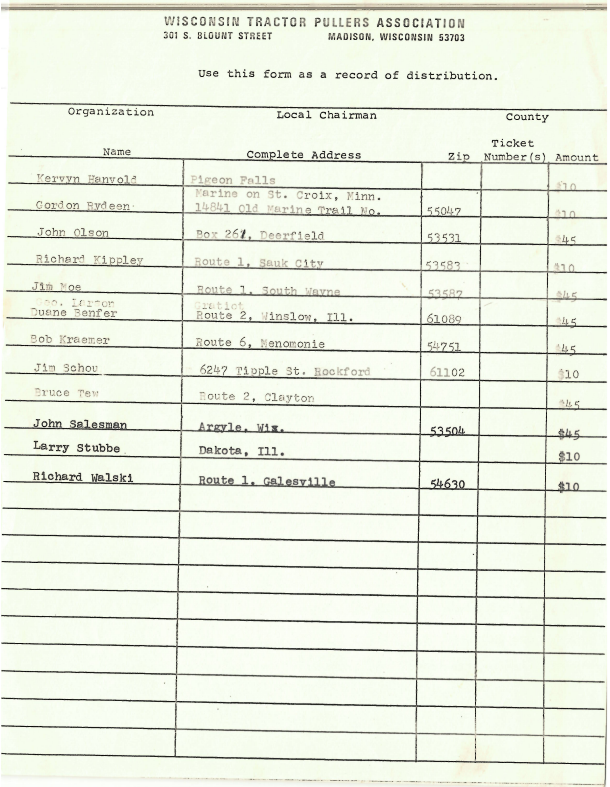 The decision to hold the first NTPA national sanctioned tractor pull in Wisconsin was made at the May 15, 1974 Board of Director’s meeting. This pull would be called the “Badger Nationals” and held at Walworth County Fairground in Elkhorn, WI. The first “Badger Nationals” were helod on July 6th and 7th, 1974.

May 15th, 1974 WTPA Board of Directors Meeting Minutes

and the Badger Nationals Pull Flyer 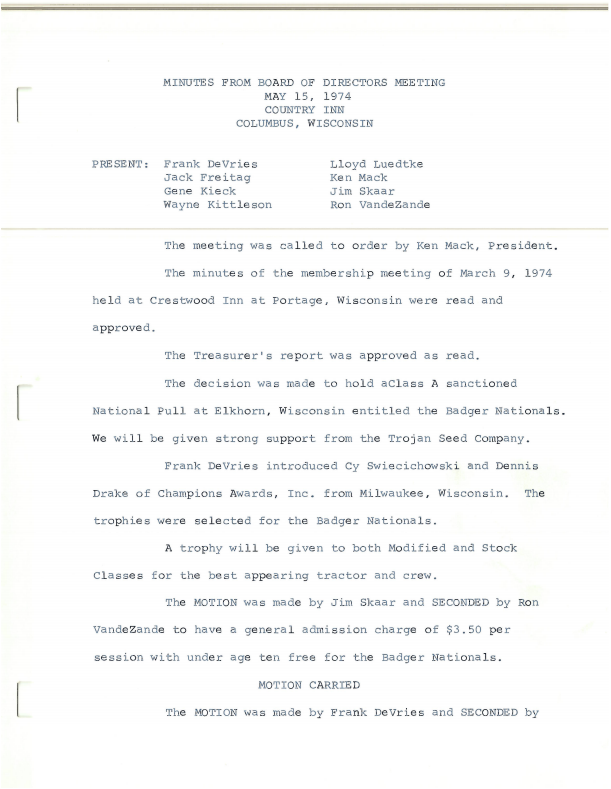 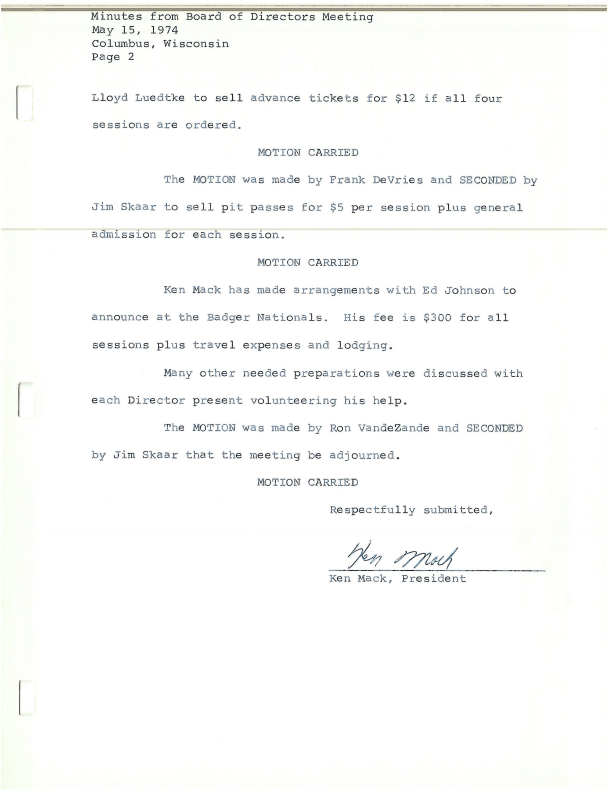 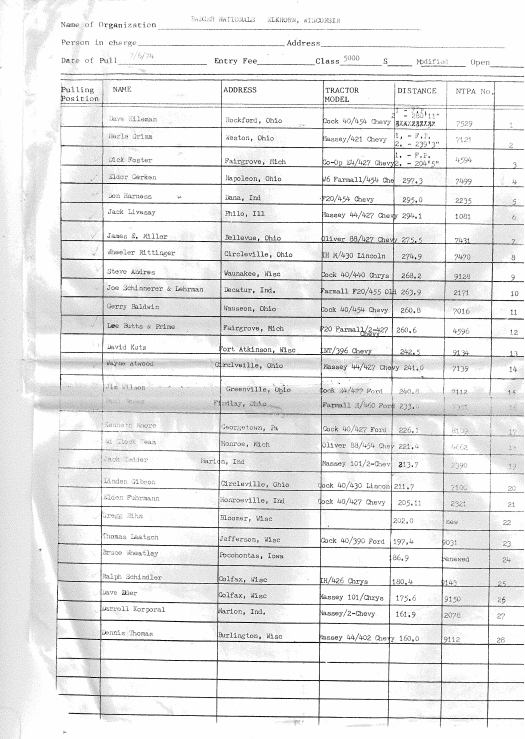 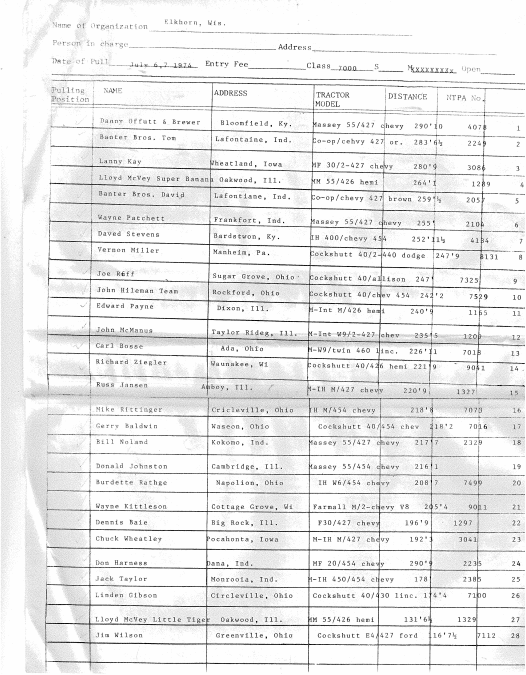 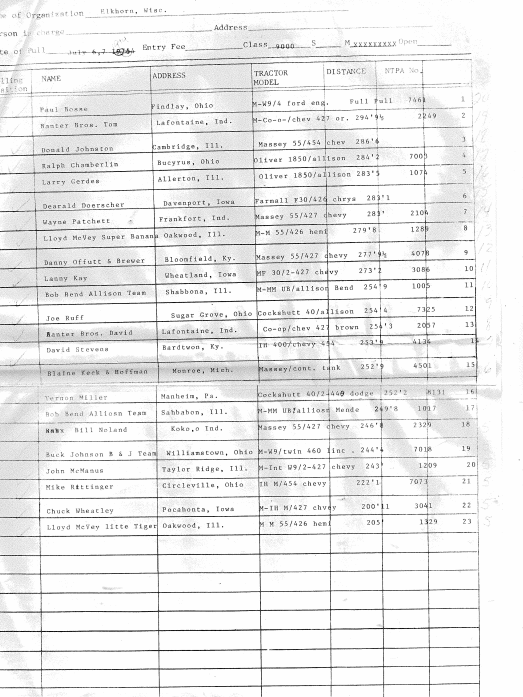 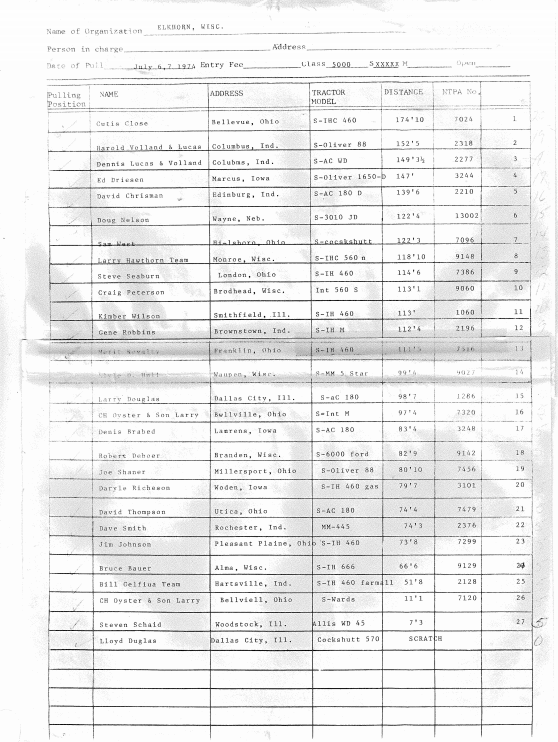 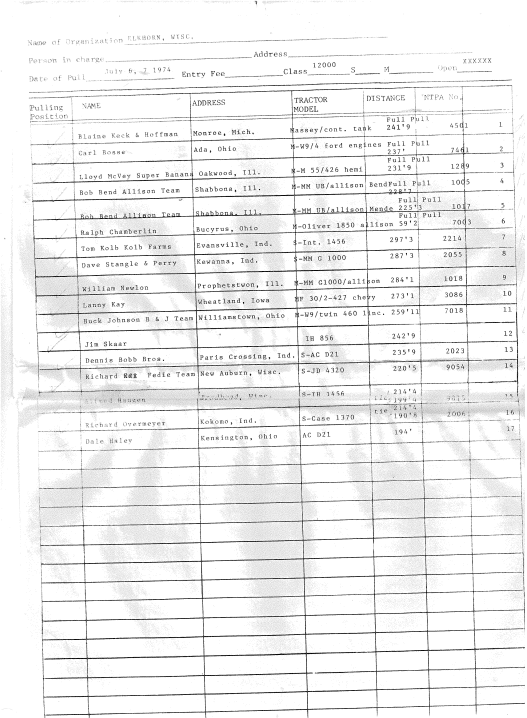 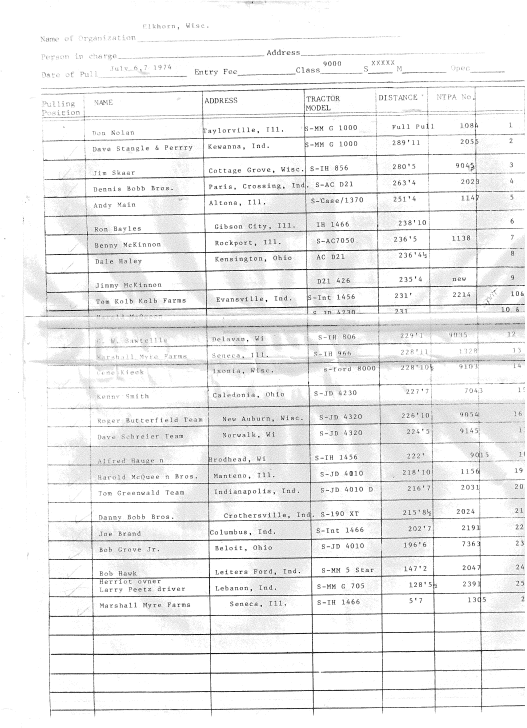 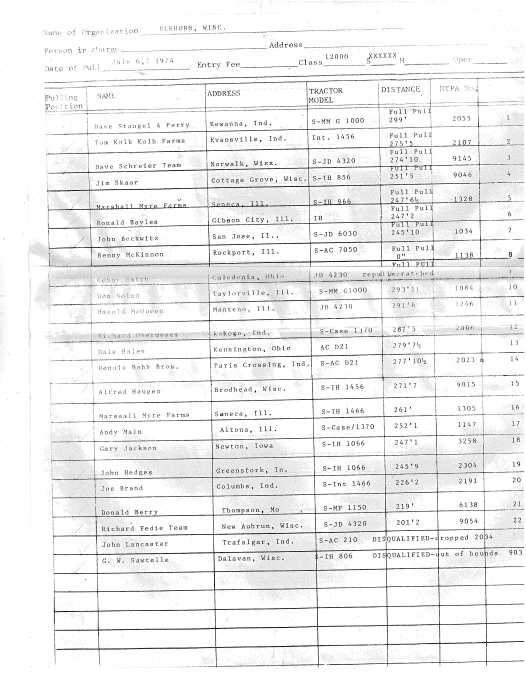 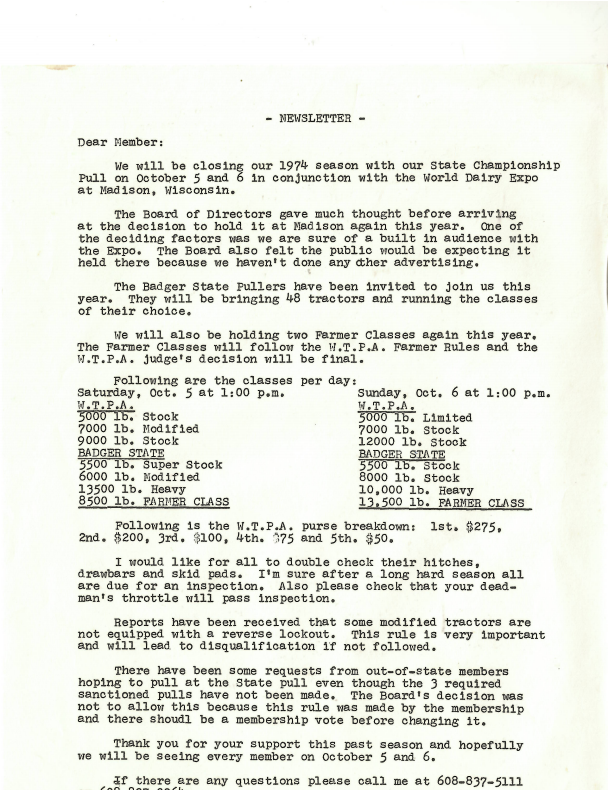 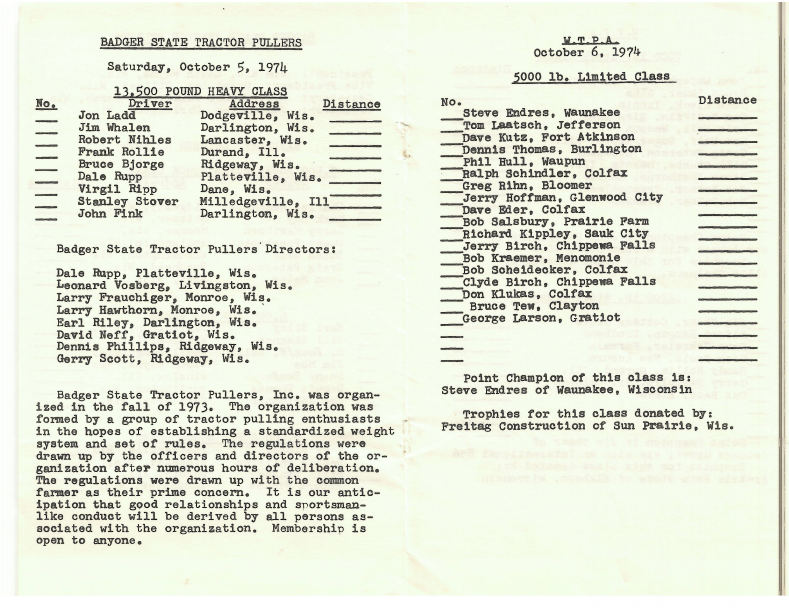 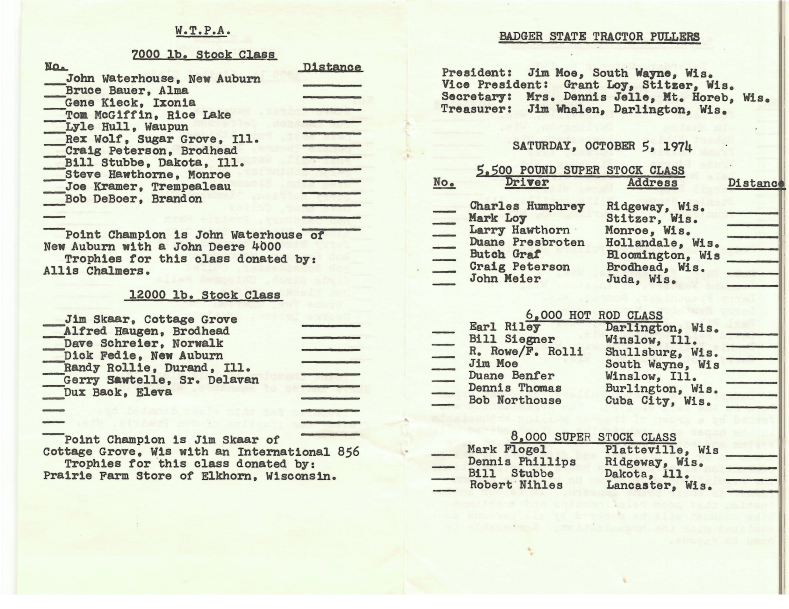 1973 and 1974 were two major years for the Wisconsin Tractor Pullers Association that has help shape many aspects of what we know today. The true beginnings are great times to reflect back on and see how much has evolved in our sport and how much we have grown as an association!